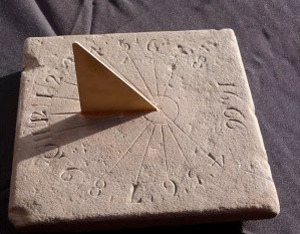 A sundial stone inscribed with the date 1666 was found some twenty years ago at a place called Duncraggan on the southern edge of the Scottish Highlands lying in a pile of rubble. From this unlikely beginning developed a tale of mystery and surprise. The stone’s owner wanted to know if it was genuine? The story was taken up by Alastair Hunter who carried out researches and then restored it as a working sundial.

The big puzzle was where the stone had originally come from? “It would be unlikely to find a stone sundial somewhere like Duncraggan because round there the land is very poor,” says Alastair. “We had to investigate whether it was connected with anywhere a bit more populated.” The National Museum of Scotland confirmed that education about making a sundial was common in the 17th century, and a stonework specialist identified the stone as Scottish sandstone from near Dundee, which is a long way from where it was found.

The mystery of how and when it moved across the country is probably to do with a past owner taking it with them, but there was a surprise still to come. The mathematics of the hour lines inscribed on a sundial need to conform to the latitude of where the dial is located. In this case the lines were inscribed for somewhere in England, a very long way to the south. The best guess is that this dial was copied using lines from an example for a different place, perhaps it was homework from a textbook!

The dial is now restored with a gnomon to match the latitude of the stone, and to the delight of its owner. The whole story is published in the March issue of the British Sundial Society’s Bulletin. Alastair Hunter will tell the story in a paper he’s presenting at the annual conference of BSS being held this year in Edinburgh on 5-7 April.

END_OF_DOCUMENT_TOKEN_TO_BE_REPLACED

The sundial is attracting a lot of interest, and people study and discuss it for a long time. Inverewe Garden, National Trust for Scotland END_OF_DOCUMENT_TOKEN_TO_BE_REPLACED