Sundial and clock hours and the difference between them

Sundials tell the time from the sun. The hour lines on the dial measure the passage of the shadow cast by the gnomon in intervals of one hour at a time. So, when the shadow reaches the hour line for 11am, let’s say, the time is eleven in the morning, one hour before midday. This is like the hour hand moving round a clock dial, but it is not quite the same. The difference is that the hours on a sundial are not exactly equal to the hours on a clock. 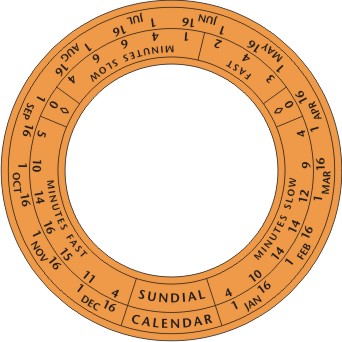 A calendar of sundial time corrections

Sundials measure exactly how the sun travels across the sky, but although this movement is smooth it is not quite regular. The sun will advance slightly and later in the year will slip behind, when compared with the hours on the clock. The reason for this is that the earth’s annual orbit round the sun is oval and the earth’s axis is tilted.

When clocks were first invented they made the hours regular. They ran at the sun’s average (mean) rate for the year, and that is how they run today. This was formalised as ‘mean time’, leading to Greenwich Mean Time (GMT).

Nowadays, of course, sundials are not needed for telling the time, but years ago they were very important. This was because clocks used to be erratic and had to be re-set quite often, and because the sun was the only available time-check.

Using the two corrections, sundials and clocks agree with each other, but without them their times can be half an hour or more apart. This is one reason why sundials have had a bad press, summed up by Hilaire Belloc’s rhyme from the 1920’s: “I am a sundial and I make a botch / of what is done much better by a watch!”

Knowing how to compare a sundial’s time with normal time found on clocks, watches, phones, computers, and everywhere else, adds a little extra pleasure to owning a sundial. It is also rather important for setting up an accurate sundial.

END_OF_DOCUMENT_TOKEN_TO_BE_REPLACED

The sundial is attracting a lot of interest, and people study and discuss it for a long time. Inverewe Garden, National Trust for Scotland END_OF_DOCUMENT_TOKEN_TO_BE_REPLACED