The glossary explains sundial words. Some words are unique to sundials. Some are everyday words that mean something particular for sundials. The glossary will help in understanding the principles of sundials and time, which have a long history. The selected list of further reading provides background and will lead to more precise definitions than are given here. 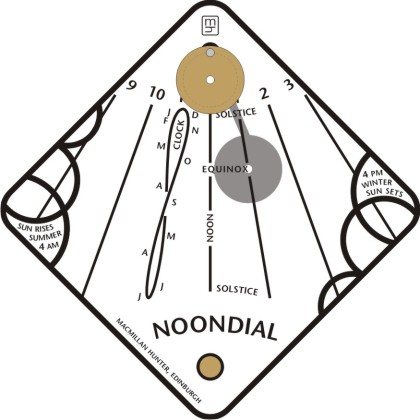 ANALEMMA. A continuous line on a dial that marks mean time at a particular hour, eg 11 o’clock. It is the equation of time applied to solar time. It applies the whole year. Its shape is a twisted loop like a figure-of-eight.

ARMILLARY SPHERE. A globe made out of rings. Ancient astronomers regarded it as a model of the earth and of the sky. It is often used as the construction for a sundial.

AUTUMN. The season that starts at the September equinox (March in the southern hemisphere).

CLOCK. An indicator of mean time.

DIAL. 1. The plate or surface showing the hour lines. 2. The sundial itself. Originally dial meant a daily cycle.

EARTH. The planet we live on.

EQUATION OF TIME. The difference between mean time and solar time. It is normally printed as a table that gives the number of minutes (plus, minus, or zero) that apply on each day of the year.
Read more →

EQUATORIAL or EQUINOCTIAL SUNDIAL. A sundial with the dial parallel to the equator of the earth.

EQUINOX. One of two dates in the year when the sun is over the equator. Day and night are equal.

GNOMON. The pointer on a sundial.

GREENWICH MEAN TIME (GMT). The mean time used in the time zone centred on Greenwich, UK. GMT is the national time for the UK.

HORIZONTAL SUNDIAL. A sundial with a horizontal dial.

HOUR. The equal time period in a 24 hour day.

HOUR LINE. The line on the dial when solar time reaches the hour, where the shadow of the gnomon falls.
Read more →

LATITUDE. The degree north or south of the equator. The equator is at 0°, the north pole is at 90°N, Edinburgh is at 56°N.

LOCAL TIME. The solar time at the local meridian.

LONGITUDE. The degree east or west of Greenwich, UK. Greenwich is at 0°, Edinburgh is at 3°W. The prime meridian of the world runs through Greenwich.

LONGITUDE CORRECTION. The difference between time at the meridian of the time zone and time at the local meridian.

MEAN TIME. The average of solar time. Mean time is a concept. It is the idea of what would happen if solar time did not vary through the year. It was created for clocks.

MERIDIAN. The local line of longitude.

NIGHT. The period from sunset to sunrise.

NODUS. A measurement point fixed on the gnomon.

NOON. The solar time when the sun is highest in the sky, ie midday.

ORBIT. The circuit of a planet round the sun.

POLAR AXIS. The line that runs through the south pole and north pole. The earth rotates on its polar axis.

POLAR SUNDIAL. A sundial with the dial parallel to the polar axis of the earth.

SOLAR TIME. The time on a sundial.
Read more →

SPRING. The season that starts at the March equinox (September in the southern hemisphere).

SUMMER. The season that starts at the summer solstice.

SUN. The centre of the solar system. The sun is our star.

SUNDIAL. An instrument that finds the time by the sun and shows it on a dial using the shadow of a gnomon.
Read more →

UNIVERSAL SUNDIAL. A sundial that can be adjusted to operate at different latitudes.

VERTICAL SUNDIAL. A sundial with a vertical dial.

WINTER. The season that starts at the winter solstice.

YEAR. The period of days for the earth to orbit the sun.
Read more →

Further reading on sundials and time

The reading list is brief. It is a starting point on the subject, before considering the vast literature that exists.

The British Sundial Society. The society’s website is a comprehensive resource on sundials. The society’s membership, activities, and publications are pre-eminent worldwide.

Sundials. by Christopher Daniel. Osprey Publishing, 2004. This little book is an eye-opening introduction to amazing sundials, past and present. Christopher Daniel MBE is President of the British Sundial Society.

The Story of Time. by Kristen Lippincott with Umberto Eco, E H Gombrich and others. Merrell Holberton PUblishers, 1999. This magnificent publication accompanied the exhibition held at The Queen’s House, National Maritime Museum, Greenwich, London, from September 1999 to December 2000. It is a beautifully illustrated scholarly work written by worldwide experts.

Shadows Pro. This all-embracing website carries an astonishing depth of information on sundials, astrolabes, and astronomy. Every type of instrument is covered, including workings, construction and photos, plus calculation software.

The Ancient Sundials of Scotland. by Dennis Cowan. Blurb.com, 2011. This book is a showpiece for the very best of Dennis Cowan’s wonderful photographs of Scottish sundials. The sundials are old and very beautiful taken in their historic surroundings.

END_OF_DOCUMENT_TOKEN_TO_BE_REPLACED

Thank you Alastair. It looks superb. Am looking forward to installing it. Kent, England END_OF_DOCUMENT_TOKEN_TO_BE_REPLACED