Time, sundials, the calendar and clocks in history 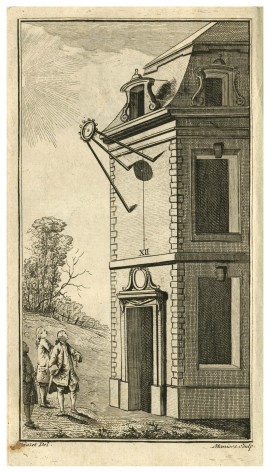 Gentlemen in the eighteenth century using a sundial to check the time of noon on their pocket watch.

To the earliest civilisations, the passage of the sun across the sky was both mysterious and yet familiar. So much of life depended upon it that determining its movements became vital. Simple devices for measuring time were constructed from stone in the rule of the Pharaohs. Babylonian astronomy and Greek mathematicians greatly advanced the development of sundials in the ancient world.

Later Julius Caesar would use the calculations of Sosigenes to modify the calendar, introducing the leap year, and in Renaissance Florence Cosimo I deí Medici would instruct Egnazio Danti to create an equinoctical armilla sundial, as described by Ptolemy, for measurements of great accuracy. At last it was possible to create a calendar to determine the time of the equinoxes and to resolve the date of Easter, known today as the Gregorian calendar.

Progress in the science of sundials went hand in hand with advances in clocks. The sundial was able to find the time and the clock mechanism was designed to keep the time. People would check their clock or watch at intervals against a sundial, and they had to make a correct adjustment between solar time and mean time.

The shadow cast by the gnomon or pointer on a sundial passes across the face of the dial in the course of a day and its position indicates solar time. On many dials the analemma loop or a separate chart will show how to find mean time. The shadow travels up and down according to the seasons.

END_OF_DOCUMENT_TOKEN_TO_BE_REPLACED

Thank you Alastair. It looks superb. Am looking forward to installing it. Kent, England END_OF_DOCUMENT_TOKEN_TO_BE_REPLACED