How the analemma represents the equation of time 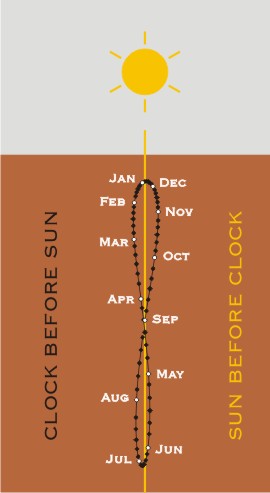 The figure-of-eight analemma is the equation of time plotted onto a sundial.

Earth’s orbit is an ellipse. The orbit runs slightly faster when the earth is nearer to the sun from September to March. Earth’s axis is also tilted. The northern hemisphere tilts towards the sun from March to September.

The combined effects of the ellipse and the tilt result in the length of each solar day being slightly different from the previous day. This is why solar time varies through the year. In November solar time is 16 minutes ahead of mean time, in February it is 14 minutes behind, and on 15 April and 1 September the two times cross over, carrying on in an endless cycle. The analemma represents this endless cycle and is charted on a sundial to let it read like a clock in mean time. It looks like a figure-of-eight loop.

END_OF_DOCUMENT_TOKEN_TO_BE_REPLACED

The sundial looks fantastic thank you. I have just mounted it in the pouring rain! Montreux, Switzerland END_OF_DOCUMENT_TOKEN_TO_BE_REPLACED