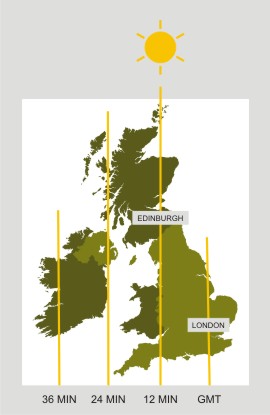 The longitude correction adjusts for differences in solar time in a time zone.

The longitude correction adjusts between solar time and national time. It amounts to four minutes of time difference for every degree of longitude. Solar time in Edinburgh at longitude 3°W is 12 minutes later than London. Time zones were introduced worldwide to deal with the problem of differences in solar time.

The fixed point of solar time is noon, which is midday when the sun is highest in the sky. Noon is a local time of day. At noon the sun is on the meridian or local line of longitude. Because the sun travels from east to west, noon is earlier at places to the east than the west.

The idea of local time was once familiar in daily life. Local time was in standard use up to the nineteenth century. The main reason for moving from local time to national time was to unify railway timetables. Before then, when travel and communication were slow, differences in time between different places were not very important.

END_OF_DOCUMENT_TOKEN_TO_BE_REPLACED

Thanks for the superb craftsmanship which will be a feature for many years to come. Tonbridge, England END_OF_DOCUMENT_TOKEN_TO_BE_REPLACED