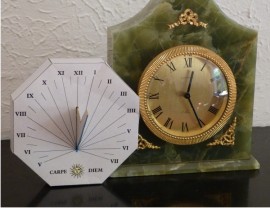 It was an honour to be invited to give a talk at the monthly meeting of the British Horological Institute East of Scotland Branch at Edinburgh in February. Alastair Hunter received the invitation from Branch Secretary Ashley Strachan back in September 2012 when they agreed he should speak on the subject of ‘Modern Sundial Timepieces’.

“I have never spoken about sundials to clock people before,” says Alastair, “although I’ve always liked clocks. We had clocks at home when I was small, and my grandfather had clocks. My brother and I used to try and make them all strike at exactly the same time! And in our garden we had a sundial. Since then I’ve learned a bit more especially about the common history that sundials and clocks share together.”

In his talk, Alastair first explained what a sundial is and then showed photos of some of the ancient sundials of Scotland. He illustrated beautiful sundial instruments from the past and went on to describe modern designs which are the work of a number of highly skilled sundial makers.

Questions after the talk were lively: coming from a group who number among them one who recently completed a working Ptolemaic Planetarium, Archie McQuater, that is certainly a compliment.

Branch Meetings are normally held on the second Saturday of each month from September through to May at 2pm, The Canons’ Gait, 232 Canongate, Edinburgh.

Alastair Hunter also gave a talk on sundials in February to the Morningside Heritage Association in Edinburgh.