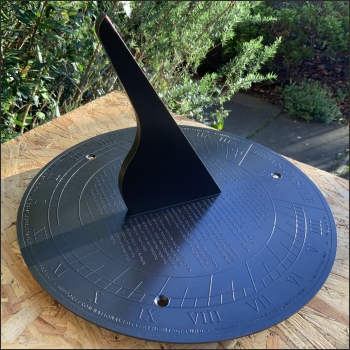 Lews Castle at Stornoway on the Isle of Lewis in the Western Isles is in the far north of Scotland. It once belonged to the wealthy overseas trader Sir James Matheson, who built the castle as a mansion home on the site of the ancient Seaforth Lodge in the 1840s. He planted woodlands to surround his property and laid out pleasure gardens with species imported from all over the world. An extensive programme of work to regenerate the castle grounds began in 2019. When an original cast iron pedestal was discovered at the castle it was decided it should be restored. It now has a new sundial, which is just finished, and END_OF_DOCUMENT_TOKEN_TO_BE_REPLACED

END_OF_DOCUMENT_TOKEN_TO_BE_REPLACED

My parents received the sundial and love it! They are choosing the best spot in their garden for it. Pennsylvania, USA END_OF_DOCUMENT_TOKEN_TO_BE_REPLACED