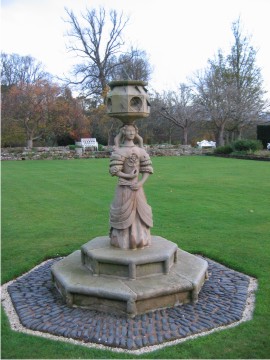 Scottish sundial stone supported by pedestal in the form of a lady. Photo: Dennis Cowan

There is a sundial standing in the garden at Lennoxlove House in Scotland that begs for an explanation of its curious form. The stone statue of a beautiful lady provides the pedestal for this sundial and there is no other like it. Unwrapping layers of history about such an unusual piece of architecture started last year in October. It was many months before we really knew the secrets of why this lady was there and what was her name. On 17th April at the annual conference of the British Sundial Society (BSS) in Liverpool, the assembled members were the first people for a very long time to hear the whole of the sundial’s history. The last members of the family who would have known about it personally lived more than a century before.

Frances Theresa Stewart (1647-1702) lived at court in London during the reign of King Charles II. She married the Duke of Richmond and Lennox and on her death she gave her name to Lennoxlove House, which was bought for her family in Scotland. Alastair Hunter pieced together the facts of the sundial that commemorates her life, and you can see the slides he showed at the sundial conference. The story will be published in the BSS Bulletin.

END_OF_DOCUMENT_TOKEN_TO_BE_REPLACED

My parents received the sundial and love it! They are choosing the best spot in their garden for it. Pennsylvania, USA END_OF_DOCUMENT_TOKEN_TO_BE_REPLACED