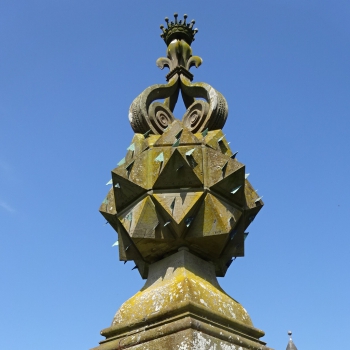 The polyhedron is an upper part of the sundial with 80 dials, and an earl’s coronet on top. Four lion sculptures at a lower level carry dials in their claws.

In the extraordinary world of Scottish historic sundials, the supreme sundial monument stands at Glamis Castle. It is the tallest and grandest sundial and is in the grounds of one of the most beautiful castles in Scotland. In August 2020 a TV crew were filming there for a future series. They asked Alastair Hunter to speak about the sundial for them.

The sundial is 350 years old. It was commissioned by Patrick, 3rd Earl of Strathmore and Kinghorne, in the 1670s, when he was making major improvements to the castle and its grounds. It is a majestic sculpture piece, starting from the four massive lions carrying four sundials in their claws that represent an illustrious history of the Lyon family going right back to the 1300s. The lions are topped with a canopy, and above this rises a tiered base for the mathematical ‘pineapple’ with 80 individual dial faces. Only the technical would know and call this a ‘stellated rhombicuboctahedron‘. The finial finishes with a flourish—four beautiful curling scrolls, a lovely ‘fleur-de-lys’ or lily flower, and the tips of four petals balancing the coronet for the Earl.

This is a display of grandeur and pride. After all, King Charles II created the new Earldom in 1677, but these were also exciting times of discovery and science. The Royal Society of London was less than twenty years old, and in 1675 the foundation stone was laid for the new Royal Observatory at Greenwich. The new sundial was a scientific exhibition piece that the Earl could show to his guests and his friends. And this is what Alastair said to the TV film crew when they came to Glamis.