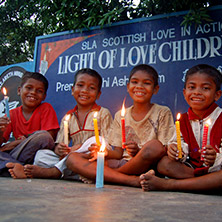 “The problem is very big. But it is better to light a candle rather than blame the darkness. Everyone can be a candle to give new life to children.” Dr Premdas, Founder, Light of Love Children’s Home & School.

‘Lighting Candles in India’ is a short and moving documentary film about transforming destitute children’s lives at the Light of Love Home and School in the town of Tuni in the state of Andra Pradesh in southeast India. We were very privileged to be invited to the film’s preview showing in Edinburgh on Thursday evening. We found it hugely inspiring .

Scottish Love in Action known as SLA are the small charity in Scotland who have achieved the extraordinary things shown in the film. They fund the school, which now has 500 children in their care, and they manage it by working with their local NGO partner in India, the Nazareth Association for Social Awareness (NASA). They feed, clothe, house, educate and provide medical care for children who are either orphans or whose relatives cannot support them.

Following the film’s launch, SLA have begun their #beacandleforSLA campaign, spreading word about what they are doing now and helping with their aspirations for what SLA will do in the future—Unlocking Potential. We wish to support them.

END_OF_DOCUMENT_TOKEN_TO_BE_REPLACED

Thanks for the superb craftsmanship which will be a feature for many years to come. Tonbridge, England END_OF_DOCUMENT_TOKEN_TO_BE_REPLACED