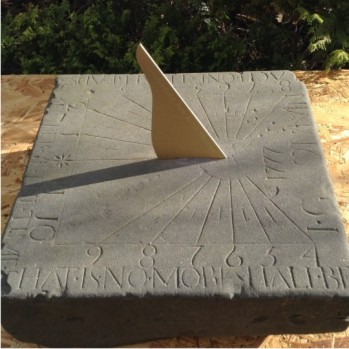 This very interesting sundial stone dates from 1777 and has beautiful carved lettering. The new gnomon is elevated at the correct angle of 60°, equal to the angle of latitude. It replaces the broken fragment of an earlier gnomon.

This very interesting sundial stone was found hidden under bushes in an overgrown garden in a small village near Inverness in the north of Scotland. It is known as the Craigdarroch stone after the place where it was found. The stone is carved with sundial lines and hours. We were asked to restore the sundial.

The stone has beautiful lettering which includes two sets of initials and a love heart. It carries the date 1777 with a fascinating inscription around the edge that says “Each one that reads remember ye the time that is no more shall be.” The stone is dense hard sandstone, which still shows all the carving very clearly after 240 years.

Unfortunately, when the stone was found, the gnomon was already broken and only a stub remained. There was nothing to indicate its original shape. The new gnomon we designed has a flowing curve. There was a question of where the sundial originally came from, it might have been made for somewhere different from Craigdarroch? We analysed the angles of all the hour lines and half-hour marks. This showed that the sundial belonged to the same latitude as Craigdarroch, 60°N. The new gnomon is elevated to this angle. It is made in brass and it will acquire a gentle patina over time standing outdoors in the garden.