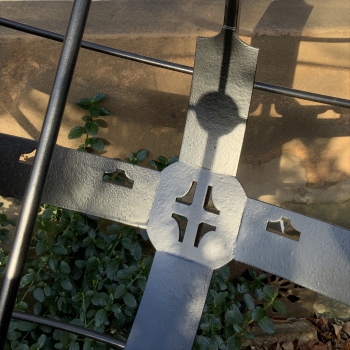 The shadow of the ball on the sundial follows the sun all year round. The sun is low in the sky in winter, and it reaches its lowest point at the Winter Solstice on 21st December. This photo is one month later on 20th January. The sun is already higher in the sky, and the ball’s shadow has moved down.

Sundials catch a shadow from the sun. It is such a simple idea. The shadow on the sundial shows the sun’s position in the sky and the sundial reads it out as time, usually the time of day and often the time of year as well. Our armillary sundial is a special one with two balls that give the time of the year measured by the height of their shadow at noon. One ball casts a shadow in the winter months and the other one in summer. END_OF_DOCUMENT_TOKEN_TO_BE_REPLACED