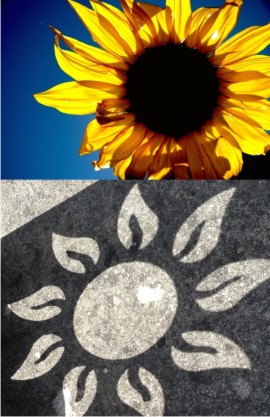 In a break with previous sundials an original new design has been created that has two shadows, one showing the time of day and another the season of the year. This adds more pleasure to having a sundial in a garden. The design has been named DIHELION meaning ‘dual sun’ after the ancient Greek words. The sundial will be launched to the public on 1 September at ‘Sculpture in the Garden’, the annual sculpture exhibition at The Savill Garden, Windsor, Berkshire.

It is thought the concept of DIHELION having two shadows has never been used in this way before. Sundial maker Alastair Hunter explains that his idea came when he realised that two dials could be angled so that each one casts a shadow onto the face of the other, although neither can cast a shadow on its own face. As a result the time and season can each be read by where the shadows lie. Even though sundial designs go back for well over two thousand years, this is a modern and innovative idea.

Turning the idea into reality has taken Alastair considerable time and imagination. The beautiful form of a sunflower has inspired the shapes he has made, which are pierced through metal so that an ever-moving sunflower image appears whenever the sun shines. Sunflowers are a lovely sundial metaphor in the way they stand in the field and turn their heads towards the sun. The new sundial will be on show in the Sculpture exhibition at the Savill Garden throughout September and October.