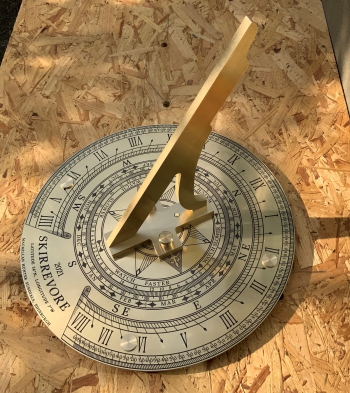 A replica lighthouse sundial made in naval brass and copied in detail from a similar one held in the National Museum of Scotland at Edinburgh.

Our replica lighthouse sundial is complete now. We handed it over to its new owner, who came to collect it from us in Edinburgh in September. “This is wonderful,” he said. “It is even better when I see it than I ever imagined. This sundial will go right in the centre of my lighthouse display.” We were pleased that all the detailed work we had done on the replica turned out so well.

We already knew this was to be an exhibition piece. During normal service conditions in the past lighthouse sundials had a heavy cast iron pedestal, but we chose to make this one freestanding for display. It has four bun feet under the dial with flat-head screws to hold them in place. Also, the gnomon is demountable for transport with removable screws that look like quayside bollards. The finishing touch is the black infill on the detailed etching and then a final polish.

The graduations on the dial are hours, half hours, quarter hours, and intervals of ten minutes, five minutes and two minutes. The divisions on the circles for the equation of time are single calendar days over 365 days of the year, and single minutes of adjustment for time. In certain places, we have relaxed these intervals to two minutes, to make the detailed etching easier to read. We copied the rather attractive boundary markers from the museum’s example. These markers fall between the  months of the year, and the annotations for ‘Watch Faster’ and ‘Watch Slower’. We copied the decorative compass rose again from the museum.

Our client preferred ‘SKIRREVORE’ for the lighthouse title, which he had seen in an auctioneer’s catalogue of an original sundial. ‘Skerryvore’ is the name of this lighthouse today. Our replica is accurate for its latitude.

END_OF_DOCUMENT_TOKEN_TO_BE_REPLACED

The last of our songbird sundials flies to Paris

Armillary sundial shadow one month on from winter solstice