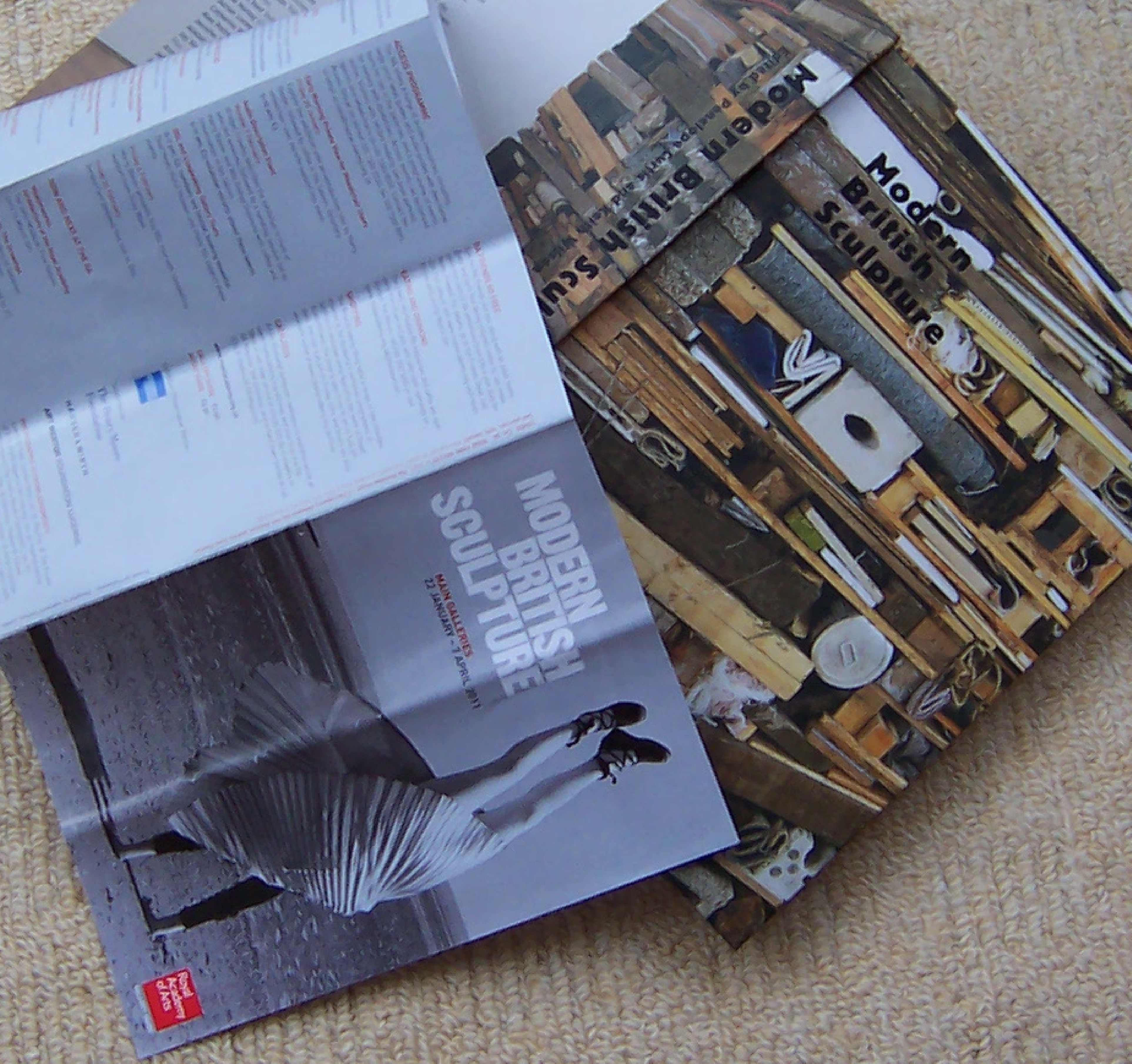 Brochure and full catalogue for the Modern British Sculpture exhibition at Royal Academy of Arts in London, 22 Jan to 7 Apr 2011

What pleasure to visit ‘Modern British Sculpture’ at the RA on Wednesday, and what luck managing to squeeze it in the day before the exhibition closed on Thursday. “It’s quite controversial,” people told me, “parts of it are a bit of a turn-off.” Yes, that was true but most of it was fantastic, and as a complete exhibition it is hard to imagine a better and more helpful display of objects to tell the story of sculpture in Britain over more than one hundred years. Well done the curators!

If I learned nothing else, I began to understand why the concept of ‘What is sculpture?’ is confusing. When artists first started seeing, in the V&A and the British Museum, sculpture figures of gods and heroes, and friezes of battles and wars, from the ancient world and from countries round the world, they copied and learned from what they saw. Their ‘figurative’ work is not so hard for us to get involved with and grasp and simply talk about as ‘sculpture’.

Later, artists started doing work that was less like what they saw, even unlike anything at all they saw, but more like what they thought instead. This makes their ‘abstract’ work harder for us to grasp, if only because by its nature it is unfamiliar, and probably we never see anything else that’s similar. Even more difficult, some work may need explaining before we really understand it, just looking at it doesn’t tell you what it is—The Cenotaph is a good example.

But, for me, by far the most powerful piece was abstract—not figurative, although ‘Adam’ by Jacob Epstein is very powerful and is figurative—it was Barbara Hepworth’s ‘Single Form (Memorial)’. This was not because of why it was commissioned, commemorating Dag Hammarskjold’s early death, or what it represented in connection with the United Nations, but just the impact of how its form hit home. By standing there it made you stand and stare.

More recent sculptures take you where you get confused, seeming to be about observations of the world, and making commentary, more than using imaginative skills and making things. Sometimes the assembly of mundane materials gets in the way of us trying to peer into the art itself, but then a work will take you completely by surprise with beauty where you least expect it—’Olaf Street Study’ by the Boyle Family worked like this for me. But, if you happen to already know about bluebottles and their life cycle, seeing tens of thousands of them laying eggs on rotting meat in a transparent box becomes an absolute barrier to comprehending any meaning at all in work that decides to borrow the name of sculpture art! 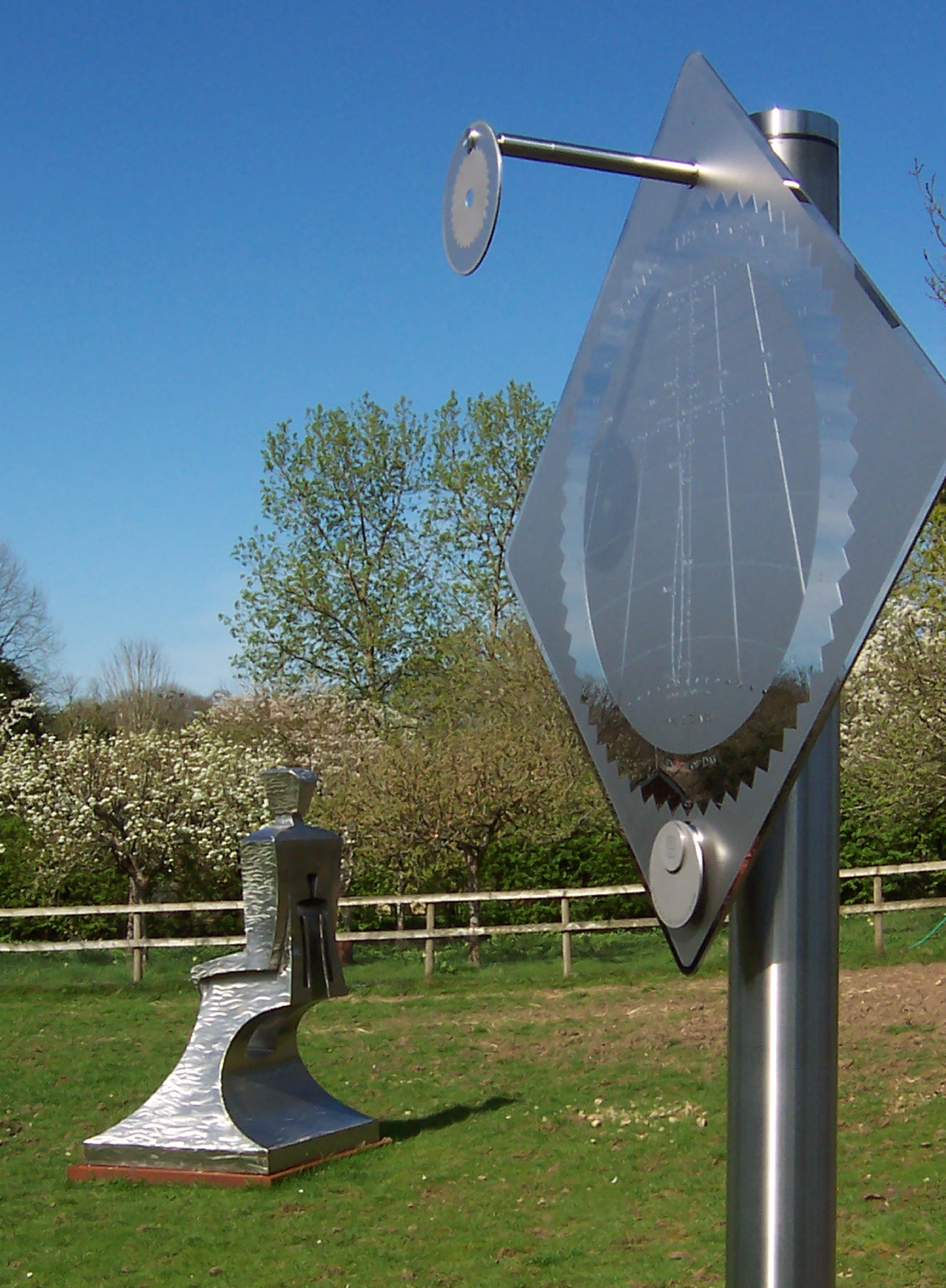 So, is sculpture modern? It seems that all sculpture is modern, in the sense that very little follows trends. So much is how the artist sees their work, and where they find their work can go. Perhaps commentators and the public can be alive to trends, but artists appear to be doing work that’s modern all the time.

And where do I fit in, well I’ve made a start. I have produced some sculpture. It does appear to be not figurative, but it’s hardly abstract either. My sculpture is hard to fully understand without being explained, but it is a pointer that leads the eye through visual forms to wider concepts of why any one of us is here—maybe it’s a commentary. And it is new, and it is mine, and I say it’s modern sculpture!

END_OF_DOCUMENT_TOKEN_TO_BE_REPLACED

I received my sundial today and it is absolutely gorgeous, thank you very much. Falkirk, Scotland END_OF_DOCUMENT_TOKEN_TO_BE_REPLACED