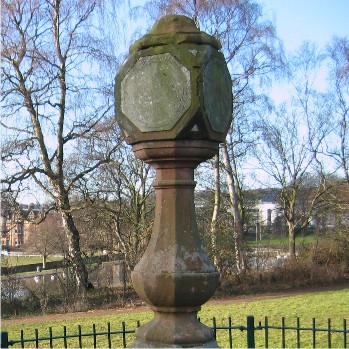 This stone sundial, erected in 1890 in the new Inverleith Park in Edinburgh, was presented by Councillor Kinloch Anderson. [Photo: Dennis Cowan]

The Friends of Inverleith Park take great pride in their large popular park in the City of Edinburgh. There is a sundial garden and a historic sundial monument. For their AGM on 27 November, the Friends invited Alastair Hunter to speak on the subject of ‘A Look at Sundials’. He showed pictures of old and new sundials, and explained how this ancient method of finding time by the sun continues to be reborn today in creative new sculpture pieces.

It was a well attended and lively meeting. The Inverleith sundial and its background history interested everyone. The sundial was presented by Councillor Kinloch Anderson to stand in what was then a new public park in 1890. This was an imaginative gesture for its day. The people enjoying the park did not look at a wristwatch to tell the time, because these commonplace devices were not invented until much later after the First World War. Instead, the sundial, which is like a four-faced clock tower, stood in place of a public clock. Now, after a century and a quarter since it was built the sundial is showing its age. There are timely plans for conservation work to extend its life, encouraged by the present day Kinloch Anderson family, starting in 2018.

END_OF_DOCUMENT_TOKEN_TO_BE_REPLACED

Thank you Alastair. It looks superb. Am looking forward to installing it. Kent, England END_OF_DOCUMENT_TOKEN_TO_BE_REPLACED