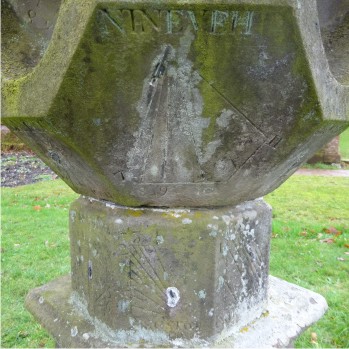 The name of Nineveh is carved in stone on one hexagonal facet of this historic Scottish sundial.

Nineveh in Mesopotamia is one of the oldest trading cities in the world. Sitting next to the Tigris river it lay at the cross-roads of trade routes to north, south, east and west. The ancient site is now Mosul in modern day Iraq. In 2019, it was a surprise to find the name of Nineveh carved on a historic stone sundial in the south of Scotland, which was to be restored.

The sundial belongs to a country estate and was found in poor condition in the garden. Close inspection revealed there were many more names of cities and places on the facets of the stone. Most related to trade routes by land and sea dating from early biblical times and right up to the 1700’s. They stretched to the Far East and to the west across the Atlantic. Each stone facet had been designed as an individual dial to read the correct local time for the place.

This sundial was clearly historic, important and probably unique. It was certainly worthy of restoration and shortly afterwards the work commenced.

END_OF_DOCUMENT_TOKEN_TO_BE_REPLACED

The sundial looks fantastic thank you. I have just mounted it in the pouring rain! Montreux, Switzerland END_OF_DOCUMENT_TOKEN_TO_BE_REPLACED