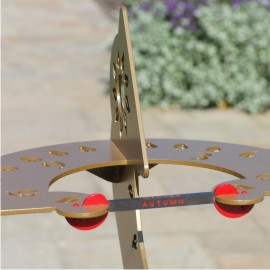 The Dihelion sundial casts an exact shadow at equinox and solstice

Three weeks now till Christmas when time stands still for excited children opening their presents. Strangely, also on the twenty-fifth of December, clocks and sundials read the same time as each other, because the equation of time is zero. Winter solstice when the sun stands still is a few days earlier. This year it is on the twenty-second of December.

It seems a while since the sunshine was warm . Autumn has been with us for many weeks now, gradually dipping into winter. The turning point was at the equinox when we left summer behind. You can see this beautifully captured by our Dihelion sundial. In the photo the shadow has fallen right on the equinox mark at the edge of the vertical meridian dial. The time of day is noon which shows no shadow on the horizontal time dial.

In three weeks from now, when time stands still, the Dihelion sundial will capture the winter solstice. Also, clocks and sundials will agree with each other, but the children may be too excited with their presents to be taking notice!

END_OF_DOCUMENT_TOKEN_TO_BE_REPLACED

The sundial looks fantastic thank you. I have just mounted it in the pouring rain! Montreux, Switzerland END_OF_DOCUMENT_TOKEN_TO_BE_REPLACED