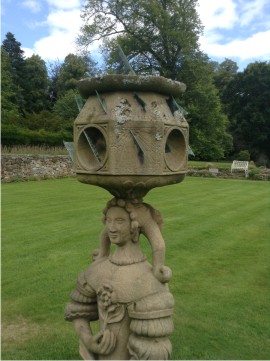 The interesting and beautiful stone sundial at Lennoxlove in Scotland would appear to be a composite piece (Canmore SC 1127053). It consists of a carved sundial stone and the sculpted statue of a lady. As described by Thomas Ross in 1890, both the sundial and the lady’s costume are from the 17th century, but the two pieces may have been put together. Firstly, the architecture is inconsistent, the decorative acanthus leaves at the bottom of the sundial stone do not have a connection with the curls on top of the lady’s head. Secondly, the whole piece does not function correctly as a sundial, the horizontal dial at the top ought to be at waist or chest height so it is easy to read but in fact it is too high to see. It is more likely that the statue of the lady was commissioned much later than the sundial, in the 19th century, by the Blantyre family in memory of their ancestor The Duchess of Richmond and Lennox (1647-1702) who in her will gave her money and her name to Lennoxlove House formerly known as Lethington (Canmore ID 56512). A full article describing the author’s investigations and explaining this story has appeared in the Bulletin of the British Sundial Society.

END_OF_DOCUMENT_TOKEN_TO_BE_REPLACED

The sundial looks fantastic thank you. I have just mounted it in the pouring rain! Montreux, Switzerland END_OF_DOCUMENT_TOKEN_TO_BE_REPLACED